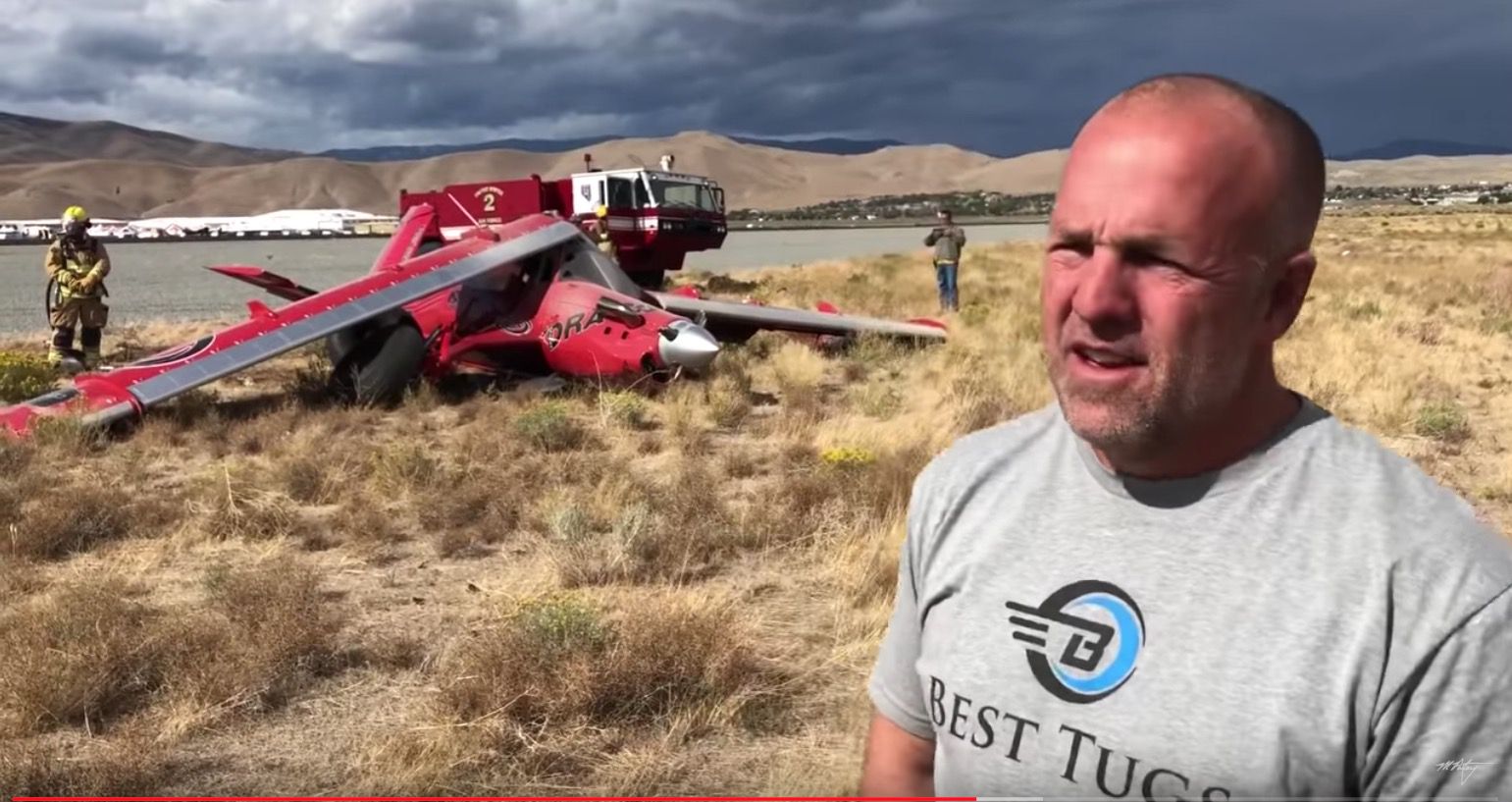 By now, you’ve seen Mike Patey’s remarkable video explaining in detail the crash of his equally remarkable Draco custom STOL aircraft. Based on a PZL Wilga airframe, the airplane was fitted with a 680-SHP Pratt & Whitney PT6A-28.

The airplane achieved instant fame for its beyond-the-edge STOL performance and other worldly looks. It was a natural for both magazine covers and the airshow circuit. As Patey explained in the video, he lost control of the airplane in a blustery crosswind while departing Reno after the races. That three people were aboard and that all emerged uninjured is as remarkable as the airplane itself. As you can see from the video, Draco was all but reduced to scrap.

Patey admirably owned the accident as his own bad judgment and both he and some media outlets filed it under the all-purpose descriptor we use when we don’t know what else to say: lessons learned. But what lesson, exactly? Don’t take off in a 30- to 40-knot crosswind? Thanks, but I already knew that and anyway, I’ve tried it at the lower number … just to see. (It worked; the landing required another runway.)

So what then is the lesson? I’d argue that it’s not a plea for more conservative decision making—which I’m not exactly a proponent of—but a reality check on the notion that you only find your limits by departing occasionally from the safety of the center lane. I know, crazy, right? You actually find your limits by pushing a little. If you survive, you’re better for it, if not … well.

This also departs from the idea that aeronautical decision making is always supposed to yield the lowest risk choice. I don’t subscribe to this. In my view, it should yield acceptable risk measured against some gain. The lowest risk choice is to stay home in bed. It could be that the gain is nothing more than you honing your skills in landing in a challenging crosswind or flying an at-mins approach at night. With that comes the acceptance that you’ve raised the risk and you could get hurt or even die as a result. That’s the nature of choice and yours would probably be different than mine.

As an aside, when I watched the accident sequence for the fourth time, it reminded me of a video I saw of a hurricane blowing airplanes down the ramp. It takes a lot of wind to do that, making me suspect Patey caught the gust from hell that was well above the base wind he figured he had. In hindsight, it may seem nuts to take off in conditions like this, but these guys did exactly that in 55-knot gusts at the Air Force Academy because that made the most sense. What would you have done? You can watch one of the pilots make the split-second decision to launch as he was being blown backward.

Patey said something interesting that we can all relate to. He mentioned his inner voice—and we all have one of those—suggesting maybe he should swing it around and tie it down instead of departing before an approaching weather front. The inner voice is otherwise known as doubt or, if you like, fear. Perhaps the lesson, then, is to always listen to your inner voice. Not sure that’s practical universal advice either. If I had a trip counter on the number of times I’ve ignored my inner voice, I’m sure it would have rolled over at least once. How about yours?

Patey did make one comment that suggests a more subtle lesson. He wanted to depart diagonally to ease the crosswind component and he asked the controller about that because he didn’t want the tower to get mad at him. Worth remembering is you don’t have to ask. You’re the PIC and you own the runway for landing and takeoff. Do what you deem necessary. (I didn’t hear those Air Force Academy pilots ask for permission to take off on a ramp.)

If you really want to get jiggy in a circumstance like that, tell the tower you realize they can’t clear you for it, but you’d like to take off (or land) on a crosswind taxiway at your own risk. You can amuse yourself in the radio silence as the operator considers that. Ya never know. The answer might be yes. Not being cleared to do something is not the same as being told not to do something.

Mike Patey’s accident notwithstanding, the level of risk general aviation pilots confront is usually relatively tame. Or at least not what I’d call high stakes. Among professional pilots, those who do qualify for high stakes risk assessment are search and rescue pilots, and specifically Coast Guard crews.

A book I’m reading, Into the Raging Sea: Thirty Three Mariners, One Megastorm and The Sinking of El Faro, offers a couple of examples. You may recall the El Faro was lost with all hands in Hurricane Jacquin in 2015. The Coast Guard learned of the El Faro’s distress shortly before communication was lost. The storm was too severe to dispatch Jayhawks, so for the initial search, it sent a C-130 out of the St. Petersburg air station.

While C-130s are used to fly hurricane flights, the Coast Guard’s airplanes aren’t equipped for that nor are the crews trained. But with 33 lives on the line, the pilots decided a surface search for a disabled ship in the midst of a Category 4 hurricane was worth the risk. After numerous sweeps through the storm, the aircraft returned to homebase so badly beaten up that the fuel tanks were breached and the airplane was gushing Jet-A. The crews could have declined the mission, but did not. Risk and reward.

Author Rachel Slade related another rescue case in which a Jayhawk dropped a rescue swimmer to pull three people off a disabled sailboat on a winter night 300 miles off Georgia. On the last hoist, the winch fouled with the rescue swimmer still in the water. Short of fuel, the aircraft commander faced the agonizing decision of trying to clear the winch or leaving the swimmer and returning to base. He did the latter. The swimmer was retrieved by another crew 90 minutes later, but nearly succumbed to hypothermia.

Although it wasn’t an aviation accident, the El Faro’s loss has all the earmarks of a major crash. Ultimately, it was due to the Captain’s decision to steam through the eye of the storm rather than circumnavigating it. As sometimes happens in aviation, his risk management was heavily tinged with denial, an assessment that cost lives.