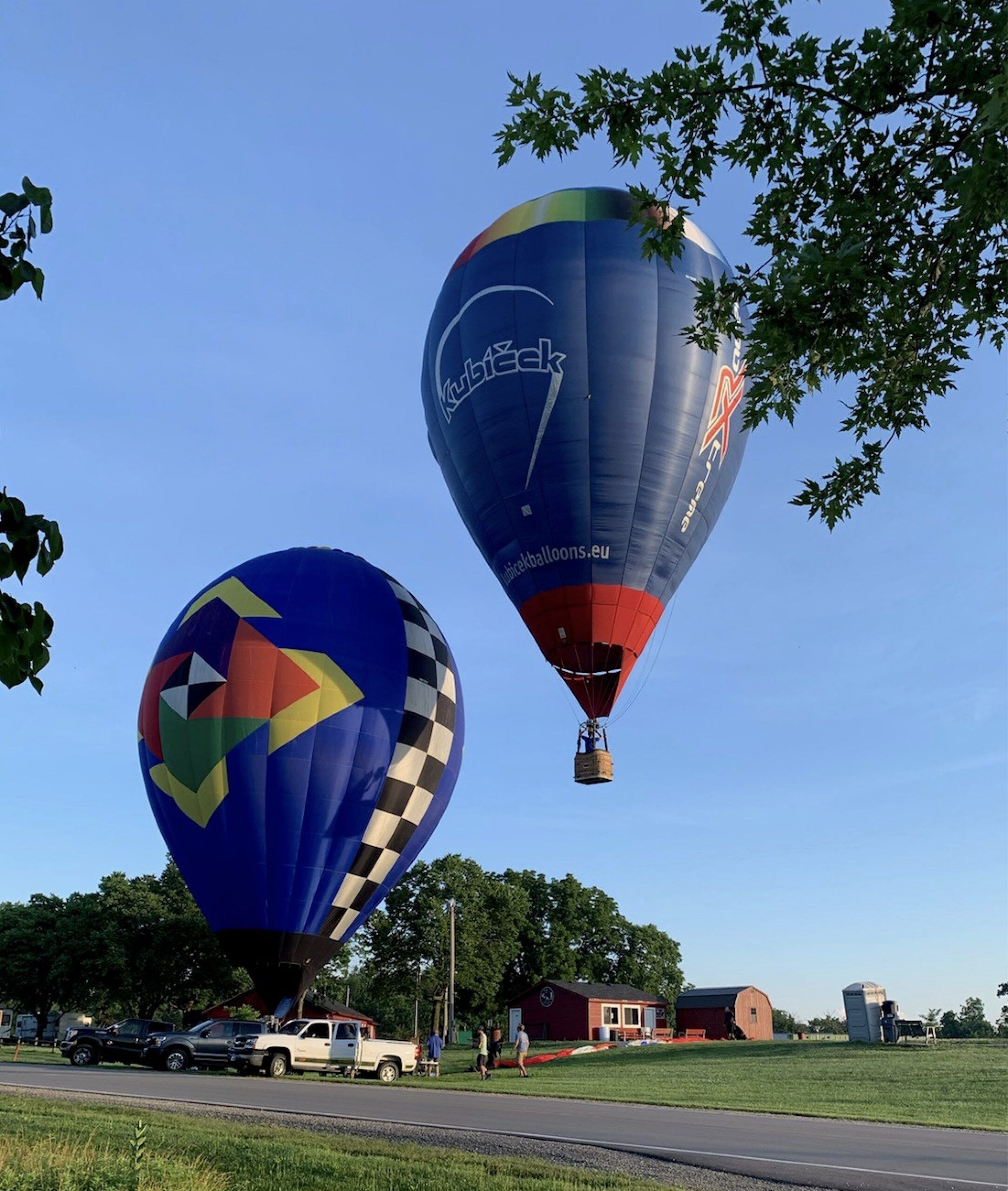 It’s hot. The air is a muddy bisque of pine smoke from Canadian wildfires, making for freakish sunrises and sets, dotted with multi-colored flaming orbs. If I didn’t know better—and I rarely do—I’d swear this was the CGI backdrop for a rejected George Lucas student film project, but its weirder. It’s Iowa.

Between EAA’s mass swoon at Oshkosh and before the Labor Day Antique Airplane Association’s fly-in near Blakesburg, IA (IA27), there’s the National Balloon Classic in Indianola, IA, named, for some forgettable reason, after a town in Texas. The Iowa clone is home to the National Balloon Museum, which is as exciting as you’d always imagined. While the Classic can’t compete in gate receipts with Oshkosh—nothing can, except possibly the annual Hajj to Mecca—balloonists from all over the world, but mostly from Missouri, cram the local Pizza Ranch, waiting for temps to drop so heated air can rise into cooler layers, unleashing balloons of all shapes from basic teardrop to Donald Duck, bobbing across the countryside like whimsical notions in the breeze.

While beautiful to observe, hot air ballooning isn’t for me, partially because I’m scared of heights. Many airplane pilots are, won’t climb a step ladder to check fuel caps but have no problem cruising at 10,000 feet. Why? Because up there we’re strapped to the airframe and, except for skydivers, unlikely to fall. But as Karey, a pilot friend, notes, “standing flatfooted inside a wicker basket, alongside some Wizard of Oz, blasting flame into a circus tent, doesn’t appeal.” If it’s your giggle, fine. I’ll watch from the ground or passing at a polite distance in something with wings. Admittedly, fantasies of being Lt. Frank Luke, World War I’s “Arizona Balloon Buster,” emerge as my Champ morphs into a SPAD XIII, but I seldom act on such impulses.

According to 91.113, balloons have the right-of-way over everything not in distress. Our private airport (6Z6) sits 5 miles southwest of the Memorial Balloon Field where the hot air bags launch or attempt to land. Perhaps the “Memorial” bit salutes those aeronauts who failed. Don’t know. And we’re talking dozens of them rising every morning and evening, weather permitting, during the nine-day festival. Again, impressive to watch.

Steering a bag of heat isn’t really a thing. Dirigibles you can steer, but balloons lack flight controls in the conventional sense. Mostly the certificated pilots apply heat to go up and catch winds aloft. Since winds shift in direction and speed, the pilot seeks the stream best for the intended route. Although intentions are grand in ballooning, destinations can be random or to paraphrase Tom Lehrer, “…once the balloons go up, who knows where they’ll come down?” Professor Lehrer was referring to rocketry, but it applies here and gets tricky when balloons compete for air and runway space with airplanes.

Let’s triangulate this hot air phenomenon. The festival’s balloon field sits 15 NM southeast of Des Moines Technically International Airport (KDSM), which is 14 NM north of my home base, and we already know it’s 5 miles from the balloon field. The Des Moines Class C uncharted outer area encompasses the balloon field. When two dozen cartoon-shaped characters launch, they do so with the cloak of invisibility. Air traffic controllers can’t see them on radar and normally don’t speak to the pilots, nor do they want to; you’d understand if you’ve ever been cornered by a balloonist at a funeral. Nice people, but distressingly enthusiastic.

To mitigate disaster—without providing positive separation—NOTAMs warn of balloon activity up to 10,000 feet MSL within a 10 -NM radius of the balloon field. Balloons in the National Airspace System are like Vermont no-see-ums, legitimate members of the ecosystem perhaps, but annoying, especially when a wayward balloon landed on my hangar years back. Sliding down the roof, it ripped off gutters as the flummoxed “pilot” full-burned the last of his LP, like a U-boat commander frantically trying to blow ballast. Didn’t work. And he didn’t rush to pay for the damage, either.

Operating VFR around hot air balloons is easy: See a big blob? Don’t hit the big blob. But the IFR out-of-towners inbound to KDSM experience a treat. While the balloon activity NOTAM is included in the Des Moines ATIS remarks, the information doesn’t always register. “Hey, approach,” I recall an irate airline captain growling at me (FOs aren’t permitted to growl; that privilege is earned), “We ‘bout hit a giant Snoopy! Why didn’t y’all tell us about it?” After verifying the crew had the ATIS information, including the useless butt-covering NOTAM, I said my radar couldn’t detect fabric-wrapped hot air. Yet another reason I won’t float in wicker baskets at 2500 feet, watching airliners approach like tiger sharks drawn to the smell of burnt propane.

Stop me if you’ve heard this: On September 19, 1783, in the presence of France’s King Louis XVI, a sheep, a duck, and a cockerel walked into a wicker basket and became the first passengers to crash in a hot air balloon. They died, but in French ability to slather glory onto defeat, were declared heroes and promptly eaten. Two months later, a physician named Pilâtre de Rozier did what the unlucky trio hadn’t. He flew in a hot air balloon, survived and being a doctor, immediately put a deposit down for a V-tailed Bonanza. Apparently unimpressed with the initial flying menagerie act, Louis XVI snubbed Rozier’s triumph, so 10 years later a Parisian mob cut off his head. A true story that should impress upon modern leaders the peril of ignoring aviation events such as Oshkosh, Blakesburg, or even Indianola.

As I write, the sun oozes a tangerine glow and lowers toward the wood-smoked horizon, portending balloons will soon pop from the tree line to float indifferently in the evening breeze, their silent passing interrupted by the breathy snarls of propane burners.  Or as Doc Rozier noted in his journal that November night 238 years ago, “Sacrebleucheese! Donnez-moi des ailes!”