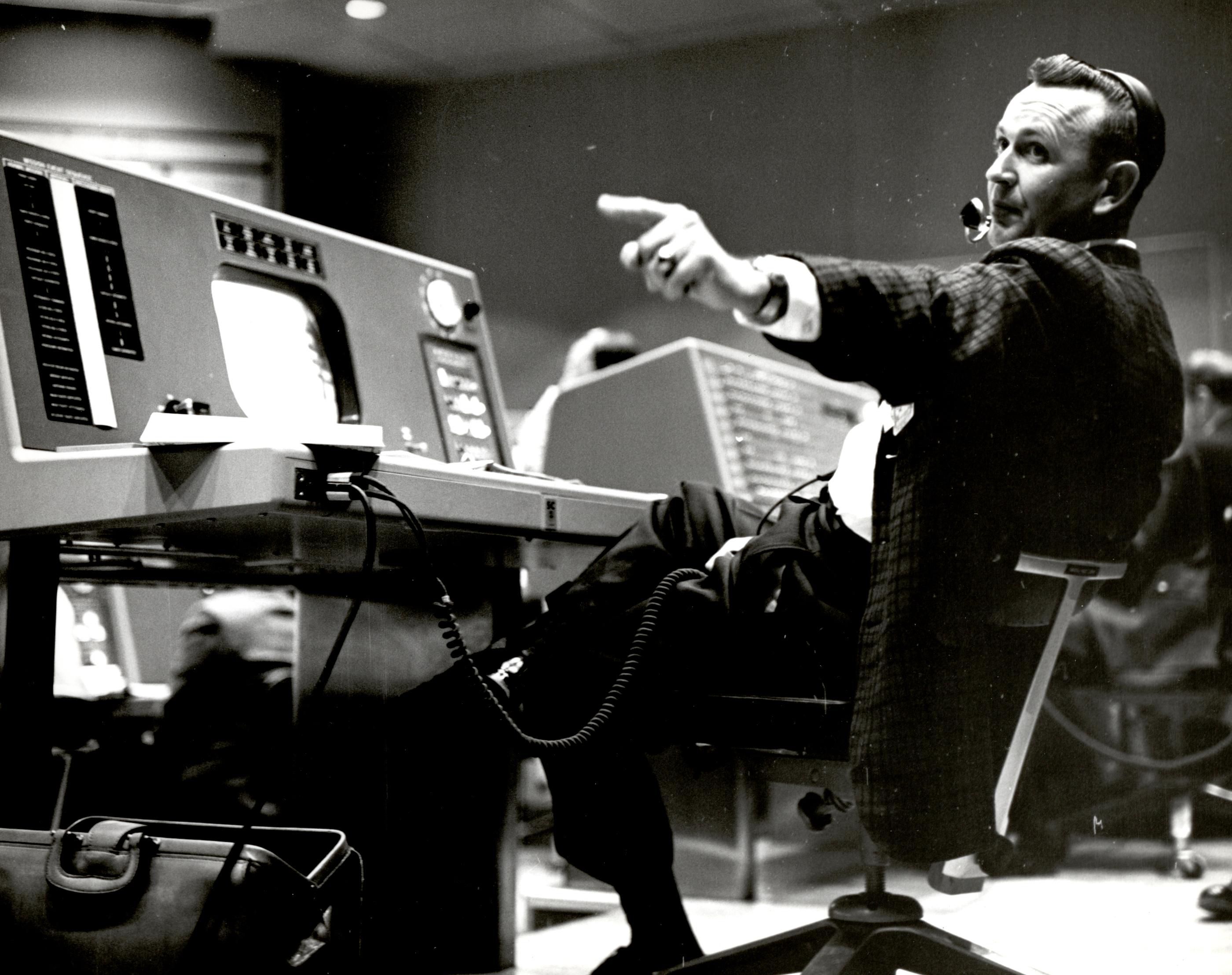 Back in the late 1950s, before there was a NASA there was a small group of young men at NACA’s Langley Research Center who were tinkering with rockets in order to probe the mysteries of high-speed flight. When the Soviet Union orbited Sputnik, this team was galvanized in to action to create the beginnings of America’s human space flight program. NACA quickly became NASA, and the small team was renamed the Space Task Group. They were tasked with figuring out a way to put a man in to space and bring him back—and to do it quickly!

Within the STG, a team was created that was responsible for conducting the actual mission—figuring out how it was going to be done, building flight plans, creating the technology for tracking spacecraft around the world and making up (from scratch) the infrastructure for space operations. The man charged with leading this effort was Dr. Christopher C. Kraft, a veteran of flight-test programs dating back to World War II, and a man with the ability to think and act boldly. He truly was the father of modern space operations and the creator of the concepts that flew men to the moon, flew the Space Shuttle for 30 years, and built the International Space Station that orbits the earth today.

Dr. Kraft passed away today, July 22—just two days after the 50th anniversary of man’s first setting foot on the moon. His name was recognized by anyone who read a newspaper or watched the achievements of the Apollo program in the 1960s, and was still recognized today by many who remember those heady days.

I first met Kraft when I joined the Johnson Space Center in 1980, just as the Flight Operations team that he created was preparing to fly the Space Shuttle for the first time. He was the Center Director at the time, and still led the way he always had—by knowing how to bring out the best in people and knowing who was on his team. Kraft kept a book of all the men (and women) who worked for him that contained their picture and a few things about them. This was so that when you were going to visit his office he could make sure to address you personally. Despite this consideration, he did not suffer fools easily, expected the best effort from everyone and built one of the most impressively intelligent and successful operations team ever assembled.

Chris was the very first NASA Flight Director for human spaceflight. That means he was the ultimate authority for real-time operations, sitting in the center seat of Mission Control and making the decisions necessary for the safe and successful completion of America’s earliest forays into space. He passed on his knowledge to his key lieutenants who staffed the same role for later Mercury and Gemini flights. These men passed on the techniques and traditions to those who flew Apollo and they, in turn, taught those of us who flew the Shuttle. I personally spent 20 years in the same seat as Dr. Kraft and got to know him personally, as well as through his legacy of technical achievements.

My last memory of Chris was from a Flight Director reunion held in Houston a few years ago. These affairs are held semi-occasionally and attendance is limited to those who have been responsible for a human-occupied spacecraft on orbit. You have to have a Flight Director Call Sign to be in the room. Chris’s call sign was “Red Flight,” and the evening ended, as they often did, with the group sitting on folding chairs listening to Chris talk about the earliest days of our profession.

I recall someone asking just how the worldwide space tracking network used for Mercury and Gemini was created—how the sites were located. His response was something like this … “Well, back in the 1950s, if a pilot was flying on an instrument flight plan, he had to check in with the ground about every 15 minutes with a position report. We figured that we were putting pilots in our spacecraft and this proved to be adequate for what they were used to, so we figured we should talk to them about that often. So we laid out the ground track around the earth, and picked a spot about every 15 minutes … and then we set a tracking site at that spot!”

Practical, reasonable, technical—those were the things that Red Flight instilled in us. Do what is necessary, don’t get cute, don’t do things just because they are cool (they were cool enough already) and always make sure you can being your crew back. Be honest, admit your mistakes, vow to do better. And always give it your best. Those are the lessons I learned from Dr. Kraft—and I vow to continue passing those values on to the next generation of those who go to explore in the heavens.

Red Flight has passed on into the mysteries of forever, but his legacy is here on Earth, with the achievements of history and the development of technology that makes all of our lives better. He will always be one of my greatest mentors.

Paul Dye is the Editor at Large for our sister publication, KITPLANES. He recently retired as a Lead Flight Director for NASA’s Human Space Flight program with 40 years of aerospace experience on everything from Cubs to the Space Shuttle.