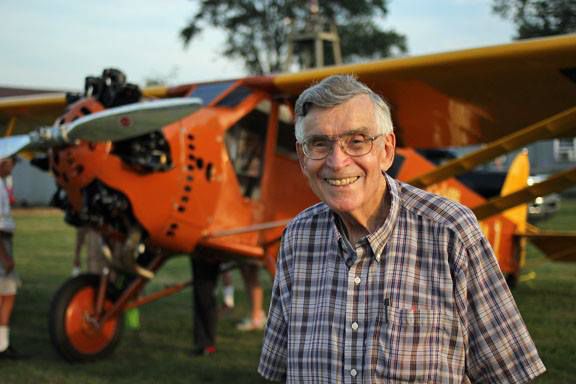 A recent optometrist exam confirmed that my vision only focuses with any clarity in the rearview mirror, which may explain why I was a history major and incessantly write about the past. I couldn’t see the next new thing coming down the glideslope if it had my name on its spinner. Early to dismiss GPS as a gimmick, I also assumed Continental would bring back the 65-horse engine, unless Lycoming beat them to it. Luckily, there’s a support group for my kind.

I’m a lifetime member of the Antique Airplane Association (AAA), an organization that plows into the future on wings from the past. Cheesy metaphor aside, AAA doesn’t merely preserve aviation classics behind velvet ropes but has been devoted to keeping the antiques flying since its inception—and this is the part that amazes me—in 1953. That’s 50 years after the Wright Brothers’ first airspace violation and three years before Cessna introduced its 172. Someone had vision.

Robert L. Taylor (RLT) was a World War II Air Force veteran, private pilot and airplane mechanic, running the FBO at Ottumwa, Iowa, airport in 1953 when he realized that the airplanes he’d found so common as a kid were disappearing. Even the ubiquitous Stearman biplanes that the Navy used to train pilots at Ottumwa when it was a Naval Air Station during the war were vanishing. Scrapped, converted to ag or simply lost, they were doomed to become memories, like so many airplanes of the 1920s and 1930s, unless someone spent $12 to place an ad in Flying magazine, announcing the creation of AAA. RLT placed the ad and gleaned 12 charter members who paid one dollar each to join. Always a plus to break even in aviation. From that dozen, a movement to save aviation’s past was launched. One state away, the Experimental Aircraft Association (EAA) formed the same year, and its founder, Paul Poberezny, joined AAA, while RLT reciprocated by joining EAA.

So, what do you do with restored aircraft? You hold a fly-in with the first AAA national fly-in at Ottumwa airport in 1954. More followed with 13 annual events at Ottumwa and three at nearby Oskaloosa, Iowa (1959-61), plus one stab at a joint AAA/EAA fly-in at Oshkosh, Wisconsin, in 1956. In 1971, AAA’s annual fly-in moved from municipal airports to privately owned Antique Airfield (IA27) near the small Iowa town of Blakesburg, a name revered in the antique airplane world. The Air Power Museum (APM) owns 34 acres, and the rest is the Taylor family’s land. Between 1988 and 1990, the fly-in took place in Bartlesville, Oklahoma, before returning to Blakesburg, where it’s been held ever since.

I stumbled upon Antique Airfield after moving to Iowa in 1984. Having attended many California fly-ins and worked in the temporary control towers at two, I embraced the casual grass field experience at Blakesburg. There’s no official airshow, but with hundreds of antiques and classics, someone’s always putting on an act. It might be a 90-year-old Curtiss Robin making a “high-speed” pass, or a klutz in his ‘46 Champ bouncing a landing in front of hundreds of friends who never catch my good landings but make certain to evaluate my failures. I’d do the same for them.

ATC consists of a guy waving go/don’t-go green or red flags, and there’s no CAP security; few alphabets matter here except RLT and his AAA creation in full blossom. FAA reps might visit and properly behaved, are welcome, particularly when, in 2008, the FAA presented Robert L. Taylor its prestigious Charles Taylor (no relation) Master Mechanic Award. Earning that award, RLT owned and restored several aircraft, including a 1936 Porterfield 35W, a 1939 Porterfield CP-50, a 1929 General Aristocrat, a 1933 Lockheed Vega and the 1941 Interstate Cadet he’d soloed while getting his private pilot certificate. I had the honor of being the flight instructor who soloed Robert Taylor’s grandson, Benjamin, in the same airplane at Antique Airfield on Benjamin’s 16th birthday.

Each Labor Day weekend this aerial carnival comes to rural Iowa, where open-cockpit Wacos, Ryans and Stearmans share the turf with cabin-class Fairchilds or Cubs, Luscombes and Porterfields, maybe even a Stinson Trimotor. The ancient chatter of Kinner radials and the song of in-line Rangers taunt the future from dawn to ever-so-gently after sunset, when the antique airway beacon is lit to signal that flying is done for the night. With no city light pollution, the sky is outer space dark with stars modern humans rarely see. Then, it truly becomes a family reunion, complete with beer, bravado and impromptu musical performances by those closest to the pub.

Robert L. “Bob” Taylor died at age 95 on June 20, 2020. I’m writing this remembrance of the greatest friend to antique airplanes on Father’s Day. Corny, perhaps, but hell, we’ve just lost the father of the Antique Airplane Association. Ultimately inevitable, but it hurts. I’d say, “Tailwinds, Bob,” but he’d remind me that you should take off and land into the wind, and besides, for antiquers it’s not the getting there that matters but the time aloft on wings that come from—and return us to—the past. I’m unapologetically sentimental that way. So, “Thanks, Bob, for your vision to look back and bring our heritage safely into the future.” Oh and, Bob … (this is awkward) most of us have GPS in the cockpit, otherwise, we’d never find our way back to the 21st century.