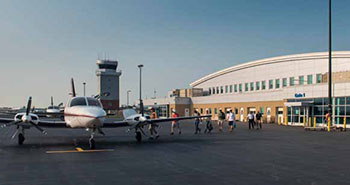 The Massachusetts senator representing Cape Cod will undoubtedly hear from his well-heeled constituents over his proposed bill to charge a $1,000 fee for every landing of private, corporate and charter aircraft in the state. Julian Cyr, one of 37 (of 40) Democrats in the state Senate, has filed a petition to have the body adopt “an Act to mitigate the climate impact of private and corporate air travel.” And although the bill might get an especially prickly reception in the toney seaside Shangri La that he represents, it would similarly apply to virtually every aircraft that doesn’t fly for hire that uses a publicly operated runway anywhere in the state. It actually specifically exempts “public aircraft, scheduled commercial passenger air transportation, freight or cargo aircraft.”

If adopted (the State House is also overwhelmingly Democrat) the new law would order every “airport commission governing a municipal or county owned airport or the board of directors of the Massachusetts port authority shall assess a climate impact landing fee of not less than one thousand dollars on personal aircraft, corporate owned aircraft and charter rental aircraft each time that any such an aircraft is to land at an airport in the commonwealth.” The airports and the state would split the money. The petition was filed in February but came to light last week.