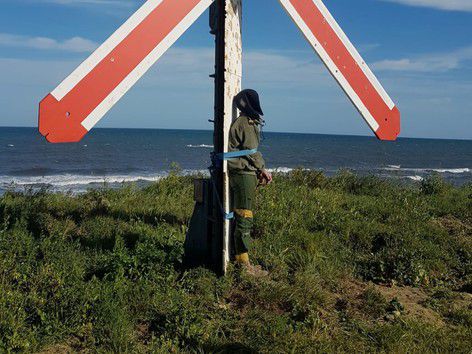 French authorities say a newly minted pilot was in no danger when fellow pilots of his first squadron blindfolded and tied him to a liberally bullet-marked concrete target on an active live aerial gunnery range. The fresh graduate was assigned to a combat fighter squadron on the French island of Corsica and not long after he arrived his squadron mates put a hood over his head, tied his hands and feet with tape and bundled him into the back of pickup for a trip to the range, according to a civil complaint filed by the pilot this week.

He was strapped to the X-shaped target mounted on a concrete pillar as some of his mates made low passes and the sound of gunfire could be heard in the not-too-distant distance. French officials said this week the closest he came to an actual bullet was a little more than half a mile.

There were photos and video taken of the incident, which are now in the hands of French civilian prosecutors. The air force acknowledged the substance of the allegations and said it was dealt with in May of 2019 when the CO of the squadron got wind of it. The squadron members responsible were confined to barracks for an unspecified period of time.

The pilot continues to fly but not at that squadron. His lawyer told European news sources he didn’t want to make waves initially so didn’t file a complaint in 2019. It weighed on him and he took it to his superiors at the end of 2020. He filed the civilian action because of inaction by the military brass, the lawyer reportedly said.

The air force didn’t disagree with the claims but it did want to clear up any impression that anyone was actually using the pilot for target practice. The gunfire the pilot heard came from an adjacent range about a kilometer away. It also said such behavior is not condoned. “The Air Force condemns any activity that could cause physical or psychological damage to its personnel,” it said in a statement.