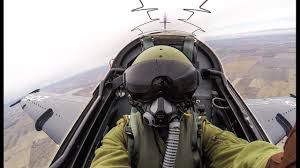 The head of the Royal Canadian Air Force is suggesting luring military pilots from other countries to fill a stubborn shortage in its own ranks. Lt.-Gen. Al Meinzinger told the Canadian Press that attempts to bring retired pilots back into uniform have been lukewarm and conventional recruitment hasn’t been able to fill the 10 percent shortage that needs filling. So, he said he’s working with Immigration, Refugees and Citizenship Canada to figure out how the pathway for foreign pilots to take an oath to serve Canada might work.

“We would not be in a position to influence … or demand certain outcomes,” he said. “But I do think it’s a valuable opportunity space for us to continue to leverage individuals who want to come to Canada and want to serve still as an air force member.” Canada is short between 130 and 195 pilots (depending on how they’re defined) of the optimal 1,500 trained and operational people it needs. A campaign to convince recently retired active duty pilots to put the uniform back on attracted only 15 takers despite an extensive outreach and advertising campaign. Meinzinger said he hopes to get pilots from other NATO countries but specifically mentioned India as another potential pipeline.