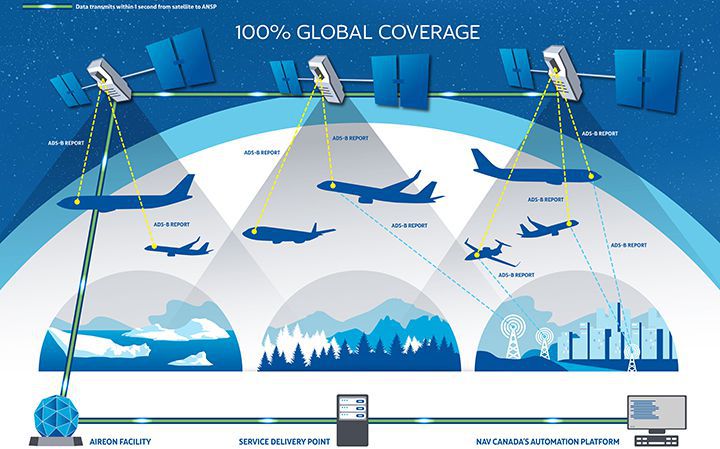 Aircraft using controlled airspace above 12,500 feet in Canada will have to be equipped with ADS-B capable of transmitting to Nav Canada’s Aerion space-based ADS-B system by Feb. 23 of 2023. The firm date was announced jointly by Nav Canada and Transport Canada. To be compliant, aircraft must have ADS-B antennas on the top of the aircraft capable of transmitting 1090 MHz extended squitter signals to satellites. Belly-mounted antennas used to communicate with the U.S. ground-based systems will not be enough. Many of the airliner, charter and business aircraft that routinely use Class A (IFR-only controlled airspace above 18,000 feet) and Class B (controlled airspace between 12,500 and 18,000 feet for IFR and CVFR traffic) included in the mandate likely already have the “antenna diversity” required for Aerion. But Nav Canada has warned that a future mandate for low-level controlled airspace is on the way and that will be a costly obstacle to many U.S. light aircraft operators who want to fly to Canada.

The company said the mandate for Class C, D and E controlled airspace will be phased in starting no earlier than 2026 to allow time for equipage. For Canadian light aircraft operators who want to use controlled airspace around major airports and larger cities, the mandate will require installation of both belly- and roof-mounted antennas or the use of a device, like the uAvionix TailBeaconX, that can transmit both up and down. That requirement ensures Canadian aircraft will also be compliant with U.S. requirements. But for U.S. operators, the vast majority of whom have already spent thousands of dollars to install ADS-B systems that do not have antenna diversity, it means installing a device that can power a roof-mounted antenna or buying one of the dual-purpose systems before they can conveniently fly to Canada.

Nav Canada suggests that the U.S. is the outlier when it comes to ADS-B because the rest of the world is going with space-based systems. “The equipage requirements of Canada’s ADS-B mandate are in line with a growing number of other countries in the world, and the adoption of satellite-based surveillance technology ensures long-term alignment with the global aviation system,” the company said in its announcement.