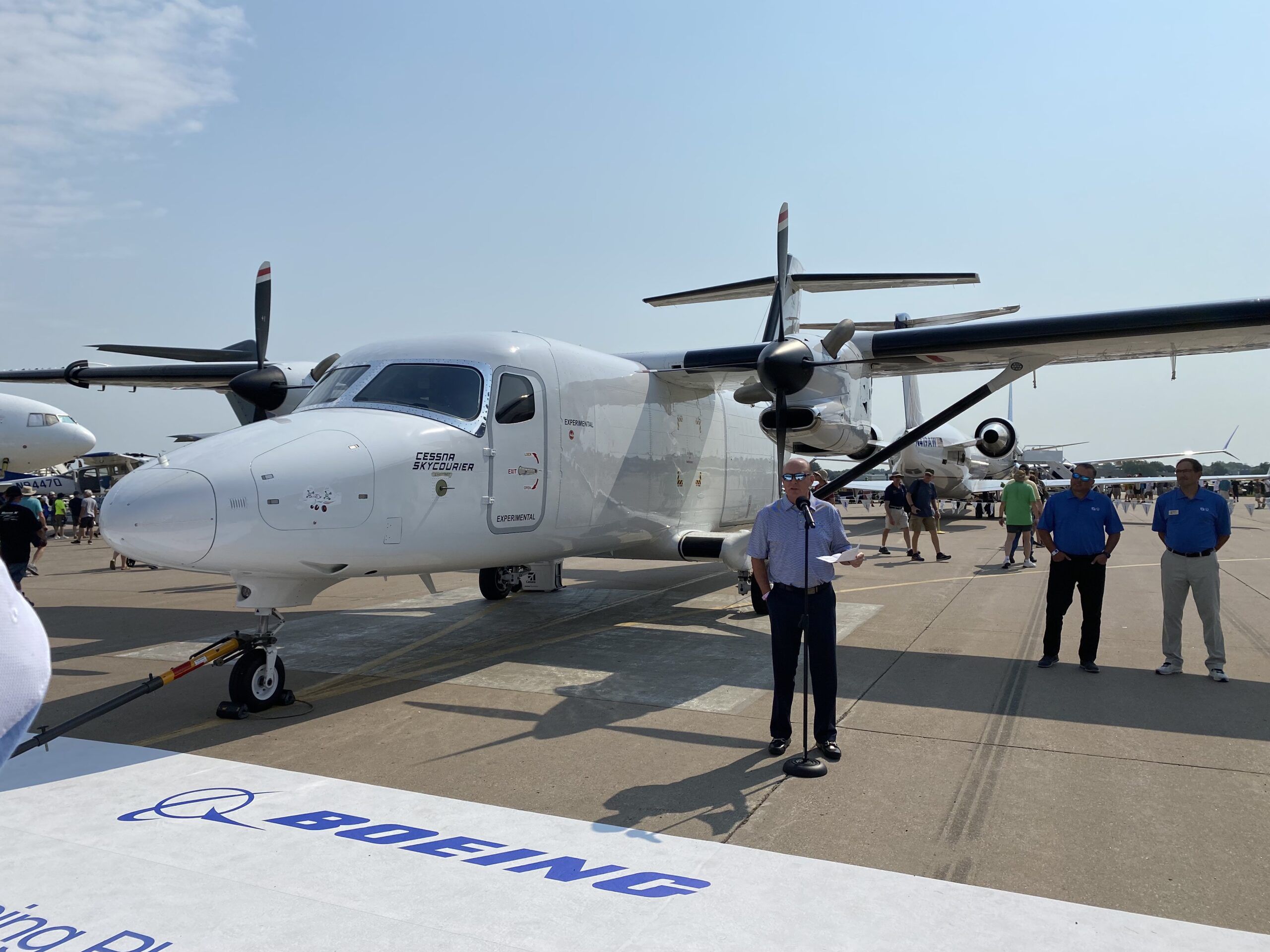 Cessna’s SkyCourier utility twin turboprop made its first show appearance at EAA AirVenture, arriving on opening day, Monday, July 26. A crowd gathered on Boeing Plaza in front of the big twin as Textron officials updated certification progress and underscored the features they believe will make the airplane a success. Also on hand were representatives from launch customer FedEx, which has 50 on order and expects to take its first delivery later this year.

They will join FedEx’s “feeder fleet,” including Cessna Caravans and larger ATR turboprop twins, uploading and delivering cargo to remote airports. FedEx says the SkyCourier offers twice the cargo capacity of the Caravan and can accommodate oversize freight as well as three standard LD3 containers. The new airplane can also handle pallet-loaded and loose cargo, FedEx says, adding that the new type will enable carrying large products to remote areas that previously required trucking. Max payload in the cargo configuration is 6,000 pounds.

After the podium speeches were completed, pairs of Textron test pilots divided up the journalists and walked them around the SkyCourier to brief the progress on the test program (three airplanes flying, 1,200 hours logged) and answered questions. Brad Silverstein discussed the remote oil sensors and oil and fuel bypass features of the Pratt & Whitney Canada PT6A-65SC engines. As he walked around, he pointed out how all the preflight inspections can be performed easily by the pilot without climbing up onto the wings or struts. “The pilot’s feet never leave the ground until you climb into the seat,” he said. With its 19,000-pound max takeoff weight, the Sky Courier is approved for single-pilot operation.

With a priority placed on quick turns, Cessna incorporated single-point refueling and a bigger-than-a-barn-door 7-foot, 3-inch cargo door. The SkyCourier also has a ground-services buss that illuminates a tail-mounted lamp to flood the loading area with light. Also designed for simplicity in securing the aircraft on the ground, there is an internal gust-lock activation system. For safety, it’s not possible to advance the throttles to takeoff power when the gust locks are activated.

The SkyCourier is available in freighter configuration ($6.8 million) and set up for 19-passenger (maximum) service ($7.3 million). Special missions applications are definitely “on the table,” though no specific plans are yet in the works, according to Textron. Standing under the cavernous cargo door, one journalist suggested it might make an excellent jump plane. The test pilots agreed, though when someone else said it might be “a bit pricey,” they both nodded.