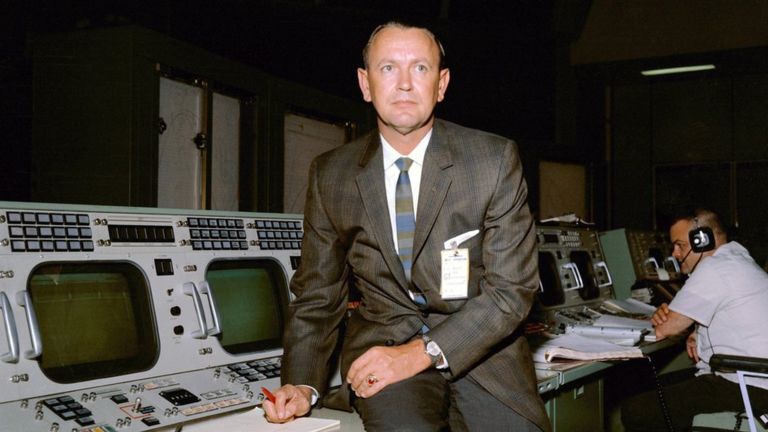 Legendary NASA flight director Christopher C. Kraft, who was an instrumental manager in the nation’s space program, died in Houston on Monday. He was 95.

Kraft’s name is emblazoned on the side of the mission control center at NASA’s Johnson Space Center in Houston, the longtime base of ground support operations for space flights dating back to the early days of the space program. Kraft was credited with developing and refining what eventually became NASA’s flight director function, which assigned command of mission shifts to a single person overseeing teams of flight controllers.

“Dr. Kraft is one of the founding fathers of the space age,” Wayne Hale, a flight director for more than three dozen shuttle missions, and later the space shuttle program manager, had said of Kraft. “He was one of the indispensable men that made Apollo happen. He invented flight directing out of thin air and created this whole new enterprise in such a way that we still follow the model he set.”

“He truly was the father of modern space operations and the creator of the concepts that flew men to the moon, flew the Space Shuttle for 30 years, and built the International Space Station that orbits the earth today,” said Paul Dye in today’s AVweb blog. Dye is himself a former flight director and is now editor at large for Belvoir’s Kitplanes magazine. Dye met and worked with Kraft in 1980.

He earned a bachelor’s degree in aeronautical engineering from Virginia Polytechnic Institute, now known as Virginia Tech in 1944. He took a job with NACA, NASA’s precursor, and spent many years in engineering flight test and management. In 1958, he became one of 35 members of NASA’s Space Task Group, which planned the first U.S. space missions during project Mercury. Kraft’s experience predates manned flight when he was involved in early flights that sent chimpanzees into space.

Kraft became director of the Johnson Space Center in 1972, just as the Apollo program was drawing to a close. He retired from the agency in 1982, but continued to live in Houston.