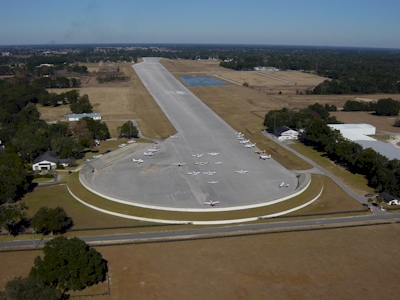 One of the largest private airports with a runway long enough for heavy jets is up for sale in Marion County, Florida. Jumbolair is known both for a quirky history and for one of its most famous residents, John Travolta, who bases at least two jets there.

Price: $10.5 million and that includes a 7550-foot runway, nearly 90,000 square feet of warehouse space and a 7696-sqaure-foot mansion, according to Bartow McDonald, the listing agent.

For monied owners wanting to build their own airport manses, the sale also includes several unsold building lots with access to the runway. “It’s a unique property with a lot of possibilities including with the golf course next door and the warehouse space available,” McDonald told a local newspaper recently.

The airport has a history only a Floridan could appreciate. The mansion on the site once belonged to Muriel Vanderbilt Adams, a great-great-granddaughter of railroad and shipping magnate Cornelius Vanderbilt. She owned 80 acres surrounding the mansion and bred horses during the 1960s and 1970s. In 1980, the inventor of the Nautilus exercise equipment brand bought the estate and added the runway and warehousing. For a time, he had a menagerie of exotic animals including elephants and rhinos. Terri Thayer took over the property after she and Jones were divorced in 1989 and helped develop the aviation community. The airport gained local notoriety in 2008 when five young men were killed after joyriding on the runway at night.