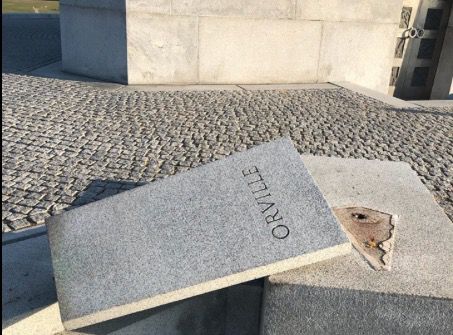 Orville Wright is missing and the National Parks Service (NPS) wants him back. A copper reproduction of a bust of one of the founding fathers of aviation as we know it was stolen from the Wright Brothers Monument on Big Kill Devil Hill overnight Saturday or Sunday morning. The heavy granite base was toppled and damaged. Wilbur apparently escaped untouched. The damage was discovered by a hiker early Sunday morning and the NPS is urging anyone who knows anything about the crime to call its tip line at 888-653-0009.

It’s not the first time one or both of the brothers has been removed from their perches above the windswept dunes where the brothers conducted their early flight tests. The original sculptures that used to be at the monument have been stolen twice before and recovered so the NPS apparently decided to put those in safekeeping and display the copies. It would nevertheless like to restore the monument as quickly as possible and the fastest and easiest way would be to get the reproduction back.