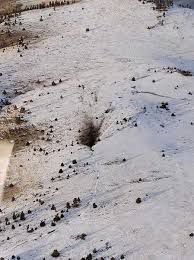 The pilot killed in the crash of a Cessna 560 in Oregon in early January had just flunked the type rating course and was likely on his first solo flight in the aircraft, according to the NTSB’s preliminary report. The aircraft spiraled from 31,000 feet to a mountainous area on the Warm Springs Reservation on Jan. 9 while on a flight from near Portland to Boise. “He had taken Citation 560 training toward the end of 2020 at a training facility in Arizona, however the owner of the facility stated that the pilot had not performed to a level sufficient to be issued a type rating or single pilot exemption,” the report said. The pilot was typed in the Grumman Albatross and Learjet. Investigators talked to friends of the pilot who told them it was likely his first time alone in the cockpit of the Citation.

The aircraft took off from Troutdale Airport in Oregon just after 1 p.m. for the short hop over the mountains to Boise but there were communications problems throughout the flight. At one point a controller issued a low altitude alert as the Citation skirted Mt. Hood. He was given numerous heading changes to maintain a track to Boise. Seattle Center warned him he was 30 degrees off course as the aircraft climbed through 27,000 feet but there was no further response from the pilot. It reached 31,000 feet before entering a one-mile spiral that ended eight minutes later at the 3,600-foot level of the Mutton Mountain Range.