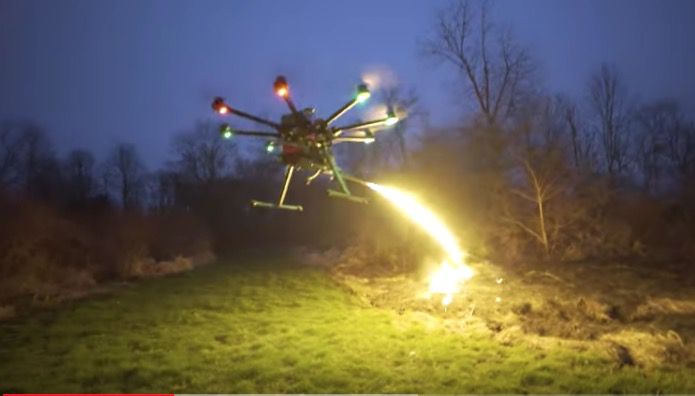 For that hard-to-shop-for pyromaniac, ready for Christmas will be the TF-19 WASP Flamethrower drone attachment from a company called, what else, Throwflame. Introduced earlier this year for $1499, the TF-19 has drawn the attention of the FAA, which reminds would-be fire drone operators that weaponizing a drone is illegal. “Do not consider attaching any items such as these to a drone because operating a drone with such an item may result in significant harm to a person and to your bank account,” the FAA said in a policy statement earlier this month.

The agency said that operating a drone with a dangerous weapon attached is a violation of Section 363 of the FAA Reauthorization Act of 2018 enacted in October 2018. Said the FAA: “Operators are subject to civil penalties up to $25,000 for each violation, unless the operator has received specific authorization from the Administrator of the FAA to conduct the operation.” Dangerous weapon, says the FAA, means “any item that is used for, or is readily capable of, causing death or serious bodily injury.”

Ostensibly, the TF-19 WASP is designed for professional use in land clearing or backfiring for wild fire control. Given that it shoots a stream of flaming gasoline from a one-gallon tank for up to 100 seconds, the TF-19 appears to be easily up to the task, according to videos on the company’s website. Collateral damage could be an issue if the device were used to eradicate nests of stinging insects of the same name. If, for some reason, plain gasoline is too tame, the company also sells a napalm additive and can equip buyers with portable backpack flamethrowers as well. In case you’re wondering, flamethrowers appear to be legal in 48 states.