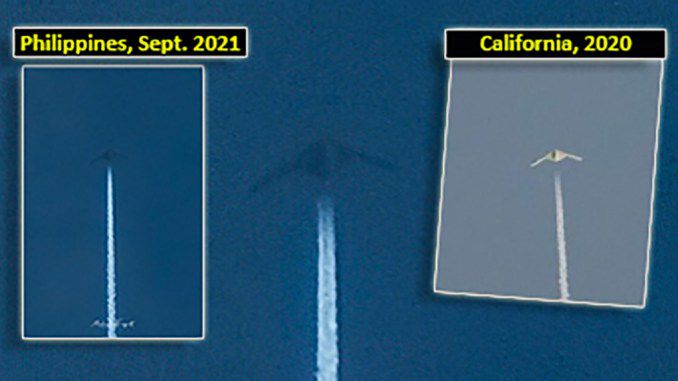 The Air Force’s latest super stealthy drone is apparently no match for your average photo sensor. There are now two publicly available images of what The Aviationist says is likely  a massive Northrop Grumman RQ-180 or a Lockheed Martin P-175 Polecat surveillance drone that may be in regular service for the Air Force in military hot spots. The publication published side-by-side images of the mystery aircraft, one taken by Michael Fugit a few days ago in the Philippines and one taken near Edwards Air Force Base last fall by Rob Kolinsky.

The Aviationist says the photo taken in the Philippines suggests the drone is operational and keeping an eye on the Chinese in the contested South China Sea. Neither of the aircraft is publicly acknowledged by the Air Force but the broad daylight appearances suggest it’s also not that much of a secret. The betting seems to be on this one being the RQ-180. The first murmurs of its existence emerged in 2013 and it has a distinctive bat-like planform. The wingspan is about 130 feet and it has two tail-mounted turbofans.