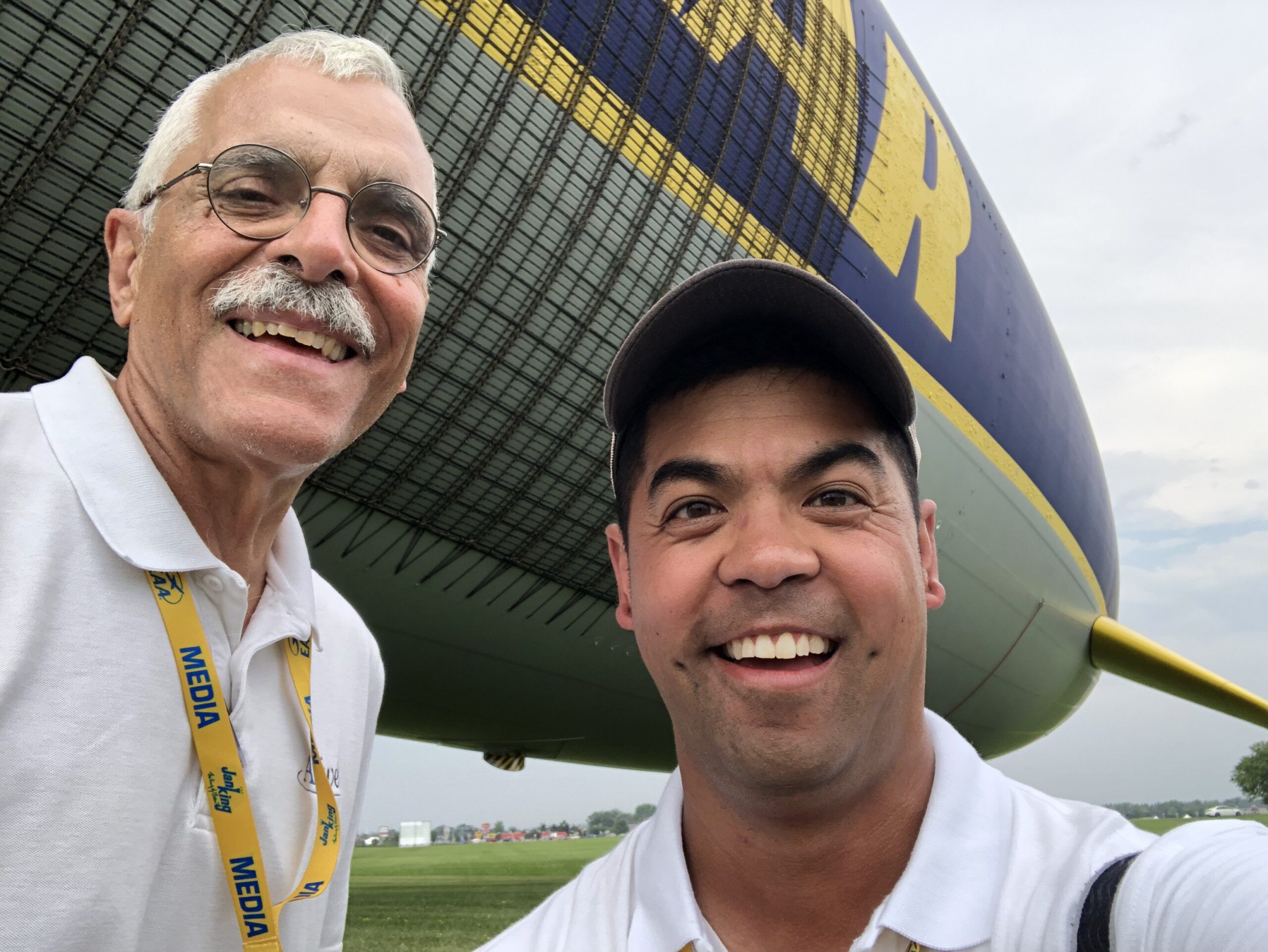 In all the world of aviation, there is nothing quite like airships and in all the world of airships—it’s a small world—Goodyear is the King Dog. They’ve got the Wingfoot Three at Oshkosh this week and colleague Mariano Rosales and I spent part of an afternoon watching them run the lighter-than-air operation with a few lucky passengers getting on and off. We had many questions. And they have many answers because Goodyear spends a ton of money on these big gas bags so they send people into the field who really like talking about them.

Mariano and I pretty much decided we wanted to have one, so we figured he would buy it and I would provide the hangar. “Ah … you’re gonna need a lot of people, too,” said Jerry Hissem, Goodyear’s chief pilot at the Akron operation, where Wingfoot Three is based. So it looks like we’re gonna need about 19 people, two 65,000-pound Mack trucks equipped with masts, a tractor trailer for support and a load of specialized gear that I’ll explain in the video I’ll post later this week.

For as interesting as blimps are to fly, what I find just as fascinating is that they’re kind of living, breathing things that require constant attention 24/7/365, even when they’re hangared, which isn’t that often because Goodyear wants to get its money’s worth out of the considerable investment these airships represent. If you’re reading this reclined in your sleeping bag in the North 40 Wednesday night, you will have looked at the weather forecast. It’s ugly. Up to 3 inches of rain and gusts to 50 knots around midnight.

The balloon watchstanders—they run three eight-hour shifts—will be busy. With the blimp “on the stick,” the mast truck can handle 90 MPH, although it hasn’t been tested to that. When it gets really nasty, the watchstander gets into the cockpit and flies the thing on the mast, keeping it pointed upwind—which it does on its own, really—and clear enough of the ground to not damage the gondola and the landing gear. If it cools down and gets heavy, which it always does at night, he has to dump water ballast or lose some of the lead shot ballast they carry in bins along the side of the gondola. When the sun comes up and all that helium warms up, it does so fast during the summer, especially if the airship is oriented long side of the envelope facing the rising sun. Superheat, they call this. When I was interviewing watchstander Jay Dewan early Wednesday as the sun was poking over the trees at Pioneer field, he said he might have to excuse himself in a hurry to pump a bunch of water into the ballast tanks to counteract the superheat. (They carry about 1400 pounds.) It would look kinda bad to have the thing standing vertical while we were talking, although the mast can apparently handle this.

Although I didn’t see it, Wingfoot Three was scheduled to drop skydivers during the Wednesday airshow and again on Friday, when some friends of mine from the SOCOM demo team will jump from the airship. Skydivers are a challenge for the blimp. For one thing, Jerry Hissem told me blimps don’t like altitude. He’s never been higher than about 7000 feet in these airships because there’s just no reason to take them that high. The helium expands and lift management becomes tricky. Plus, you can’t see that big Goodyear logo and that is, after all, the point. The Red Bull team was scheduled to exit at 1800 feet, which is about half the opening altitude of the typical skydive. They exited with BASE rigs. Hissem told me the SOCOM team would go to 3000 feet. They’ll take off as heavy as they can to account for losing almost 500 pounds of weight all at once.

As I’m writing this Wednesday night, a vicious line of storms is approaching from the northwest. If you’re camping, I’m there with you in spirit, but not flesh I’m afraid. I’ve camped in the North 40 exactly twice and got thoroughly soaked both times. It always seems to pour at night and it drains pretty poorly out there. We were always in some sort of low spot that made it even worse. There’s more room out there tonight, though. With the scary weather forecast, there was a mass exodus beginning around noon. I can’t say I blame anyone for that. Better a safer port than minimal tiedowns at OSH.

Sad news to report that John Deakin died early Wednesday morning. George Braly relayed the news, but I have no more details than that. He had been in ill health during the past few years. Longtime readers of AVweb will remember John for his excellent series of columns called Pelican’s Perch. These were richly detailed from his experience in an aviation career that most of us could only dream about. During the 1960s, Deakin flew for Air America throughout Southeast Asia and spent many years as a captain for Japan Airlines, eventually retiring on the 747. He had more Pacific crossings than most of us have takeoffs and landings.

I met John virtually through the old CompuServe user group, Avsig, and in the flesh when we flew with Scott Dyer up to Hartford, Connecticut, some years ago to gawk at an An-124 the Russians had flown in for some event or another. I have never known a more thoroughly pleasant, gracious and interesting man. John was a larger than life character, but not the loud kind that let you know about it by making himself the center of attention. We flew together a couple of times in his Bonanza and he always put me in the left seat. He did that with everyone.

It’s trite to say John Deakin was one of a kind. But he was certainly among a very select few.